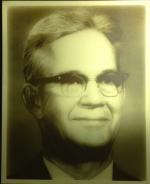 He was acknowledged worldwide as an authority in rangeland insects, and his book, Rangeland Entomology, is considered the final word on the subject.